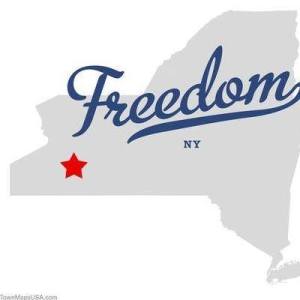 For the last 15 years I’ve been able to say, “I live in Freedom.” I’m pretty sure I snicker each time too. It’s fun to live in a township named “Freedom” for a couple reasons. 1- Sometimes I say it imagining that municipality borders mean nothing to me. 2- The Camp Vick mailing address is in Sandusky. When people hear that they often  thought I lived in Ohio. Saying “Freedom” simplified a lot of conversations. 3- Because it reminds me of the freedom we have through Christ.

Therefore, there is now no condemnation for those who are in Christ Jesus, because through Christ Jesus the law of the Spirit who gives life has set you free from the law of sin and death.

Through Christ we can live in freedom (and not just the town). We have been set free from the law of sin and death. Acts 13 says:

38 “Therefore, my friends, I want you to know that through Jesus the forgiveness of sins is proclaimed to you. 39 Through him everyone who believes is set free from every sin, a justification you were not able to obtain under the law of Moses.

What freedom indeed to be set free from every sin! Freedom from a burden we could not bear. Freedom that we would not be able to attain on our own efforts.  Freedom in Christ that delivers us from… but also freedom for… and I think that is the part that is easy to misunderstand. It is easier to understand the what we are free from… it isn’t as easy to understand what we are free for… I mean, if we are free for something, well, that doesn’t seem like freedom, that seems like restriction. We tend to like this verse from Galatians 5:

It is for freedom that Christ has set us free. Stand firm, then, and do not let yourselves be burdened again by a yoke of slavery.

I’m imagining after hearing what I’ve been saying you and I might have a conversation a little something like this:

You: So hold up now Jill! If you are telling me that Christ sets me free from something for something, well (and I’m just putting it out there) you make it sound like we aren’t really free then.

You: ooookkkaaay… then what are you really saying here?

Do you remember the story from Exodus of God sending Moses to Pharaoh with a message to let God’s people go? To understand the story of Moses we first back up and remember the life of Joseph. Of how God had given him some crazy dreams where he’d be a pretty important guy and all… and then his brothers got pretty upset (Genesis 37 says they hated him!) and while they did hold back from killing him, they left Joseph as good as dead. And, as God so often does, through a wild set of circumstances and many years later, God has Joseph in just the right place in Egypt, in a position of power to save not only his brothers but God’s people from a terrible famine and give them a home, food and security there.

But fast forward to the times of the book of Exodus and the Israelites had grown in number greatly, blessed by God and the Egyptians grew in fear.

11 So they put slave masters over them to oppress them with forced labor, and they built Pithom and Rameses as store cities for Pharaoh. 12 But the more they were oppressed, the more they multiplied and spread; so the Egyptians came to dread the Israelites 13 and worked them ruthlessly. 14 They made their lives bitter with harsh labor in brick and mortar and with all kinds of work in the fields; in all their harsh labor the Egyptians worked them ruthlessly.

It goes from bad to worse, but God had a plan. He came to Moses with a mission and a message:

7 The Lord said, “I have indeed seen the misery of my people in Egypt. I have heard them crying out because of their slave drivers, and I am concerned about their suffering. 8 So I have come down to rescue them from the hand of the Egyptians and to bring them up out of that land into a good and spacious land, a land flowing with milk and honey—the home of the Canaanites, Hittites, Amorites, Perizzites, Hivites and Jebusites. 9 And now the cry of the Israelites has reached me, and I have seen the way the Egyptians are oppressing them. 10 So now, go. I am sending you to Pharaoh to bring my people the Israelites out of Egypt.”

We remember what happened: Pharaoh’s hardened heart, the plagues, the parting of the Red Sea… the whole thing. But there is something I’d missed so many times in Exodus.

When God sent Moses and Aaron to Pharaoh the first time this is what they said:

Afterward Moses and Aaron went to Pharaoh and said, “This is what the Lord, the God of Israel, says: ‘Let my people go, so that they may hold a festival to me in the wilderness.’”

The Israelites were sure treated just plain awfully by their Egyptian slave masters. God heard their cries and he was concerned about their suffering. AND God was on the move to deliver them…. from something… yes… but also for something: worship.

In slavery in Egypt, God’s people were not free to worship Him. For many years as I recalled this story, I can’t say I thought about that. After all it is just one statement in the middle of the whole Exodus account but it is a BIG one.

God cares about what He is delivering us from… God cares about the suffering… but God also delivers us for a purpose. That’s what happened for the Israelites way back in the times of Exodus and that is what happens for each of us in Christ. Galatians 3 tells us that through the work God accomplished for us in Christ, “In him and through faith in him we may approach God with freedom and confidence.”

And that, my friends, is true freedom. The freedom to be in relationship, to worship God.

Galatians 5 deepens the understanding of our freedom further:

“You, my brothers and sisters, were called to be free. But do not use your freedom to indulge the flesh; rather, serve one another humbly in love. 14 For the entire law is fulfilled in keeping this one command: “Love your neighbor as yourself.”

Since sin entered the world in the garden of Eden with Adam and Eve straight through all of world history and human events… we have not been free. We have not been free from the consequences of sin. Through Christ’s sacrifice and redemptive work on the cross we are no longer slaves to the law of sin and death. We are free indeed! And we are free to do what sin broke: to be in relationship with and worship of God and to live in love of one another.

How will you live in freedom today?

2 thoughts on “Wednesdays with Jillene: living in freedom”

“Because of the tender mercy of our God, whereby the sunrise shall visit us from on high to give light to those who sit in darkness and in the shadow of death, to guide our feet into the way of peace.””
Today we celebrated @joshuanarraway birthday but he had plans to spread the birthday cheer for all of us to have a great day! He’s been planning this fun for a while including take out lunches, party favors, white elephant gift exchange, and family video game fun! It was a nice day. We love you so much! Happy birthday!
Avari Mae turned 10! February may be the shortest month of the year but it holds 3 Narraway birthdays. Avari starts the month with her day of fun! Tonight I’m praying for Avari, that each day she grows to know how loved and special she is to us. And that she grows to know the love of God and grows to trust in Him each day! #narrawagglebirthday #avarimaeturns10
We woke up to fresh packing snow. So we rolled lots of big snowballs to make the beginnings of a snow fort. The kids ultimate goal for this snow: to make an igloo. Will these big snow piles survive a couple hours of rain before the snow returns? We will soon find out. #narrawaggleadventures #goplayoutside
Our forecast... that’s a lot of ❄️ potential!
The kids thought this looked like God’s fingerprint in the sky! #narrawaggleadventures #goplayoutside
Loading Comments...
Comment
×
%d bloggers like this: