I have a small ziploc baggie in my purse to hold change, mostly pennies. It is for my little ladies hearts really, their generous hearts. 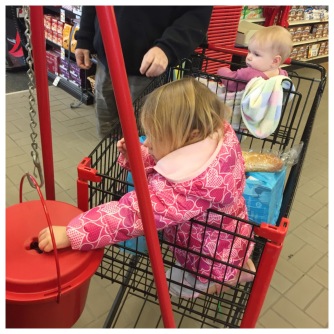 Our local grocery store has a small container at the register collecting money for a charity. In the check out isle my ladies ask almost every time, “Pennies mama?” Then they happily drop in their change. Often only a penny maybe two. And now, in the Christmas season they also ask at the Salvation Army Kettle. In fact, the other night, Avari chased down a bell ringer who was finishing her shift so she could put in one penny. 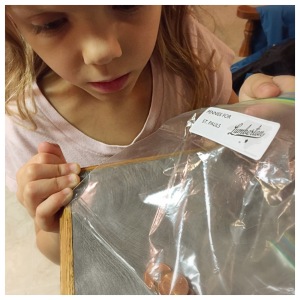 Oh my heart… all she had was pennies; she gave all she had. And I remembered the scripture passage.

41 And he sat down opposite the treasury and watched the people putting money into the offering box. Many rich people put in large sums. 42 And a poor widow came and put in two small copper coins, which make a penny. 43 And he called his disciples to him and said to them, “Truly, I say to you, this poor widow has put in more than all those who are contributing to the offering box. 44 For they all contributed out of their abundance, but she out of her poverty has put in everything she had, all she had to live on.”

Just some small pennies in a world full of need. I often feel that is all I have to offer. Two small copper coins in a world full of need.  Special offerings, Go Fund Me campaigns, Giving Tuesday, bell ringers, family and friends in crisis, special stories on the news, catastrophes around the world… needs around the world and in my backyard… and I can’t fix them. It’s like all I have are two small copper coins.

My girls have such joy in sharing their pennies. There is no “reward” for giving their money. They don’t get stickers or candy from the grocery store clerk. In fact, when a bell ringer tried to let Calah ring her bell (since she was so cute giving her pennies), Calah sat there kind of perplexed because, until that moment, giving the pennies was the only incentive she’d needed to give. Avari didn’t ask how much difference her pennies could make. She didn’t ask to save some for later. She gave. Today, she said she didn’t have any more pennies to give but she said, “I’m gonna be on the look out for another penny to share for those poor kids. Okay mama?” “Yes, Avari. You do that.”

What a lesson for my heart from my little ladies as they bring scripture to life right in front of my eyes. Maybe you too? I’m thinking I need to take some more time to reflect on Mark 12:41-44 and allow God to work in my life.

There is a moment each morning in staff devotions when I’m struck with awe of God’s perfect plans and filled with thankfulness. Such beauty in the simplicity of sitting together for meal, with funny conversations and inside jokes, followed by reading scripture and good discussion… I don’t want to forget these moments. This summer staff have blessed me immensely! In a few weeks I’ll sure miss them immensely but for now I’m so thankful! @campcowen #summercamp #summerstaff #morningdevotions #thankful
Happy 21st birthday, Micah! While it may be VERY hard for me to believe it is possible that 21 years have flown by… I’m thankful for you! Love you, @mikachu_113 ! Thanks for putting up with our birthday shenanigans yesterday! Praying that you continue to grow into the man God has called you to be!
It doesn’t seem possible that 22 years have passed since we said, “I do!” And yet… here we are! Happy anniversary, Joshua! I love you!
We might be in the thick of camp season when many people are asking, “Where is Jill?” Maybe you’re wondering that too… don’t worry. Cowen staff has it covered. They’re tracking my location… as long as I don’t move too quickly. #campcowen #livingthecamplife #whereisJill? Might be a flaw in the system as I was in the office at the time I took this picture… we will have to calibrate the map’s accuracy.
Good morning from camp! Campers are still sleeping. Staff are starting their day. What a beautiful morning!
Today our Calah Rose turned 7! She loves a good party and we loved celebrating with her. We hope her joy and enthusiasm will grow each year! Also- if you hear a lot of honking noises, she is happily learning to play the saxophone. Very happily! Very loudly! If you hear shouting and happy noises, she is likely sharing the enjoyment of her birthday presents with her family. #narrawagglebirthday #calahturns7