Do you have one of those? A sight so often encountered you almost can no longer see it?

Day in and day out, up to 5 times a day during the school year, I stand by these trees mostly unnoticed. Regardless of my lack of attention they grow on. When I choose to see, they changed my perspective. 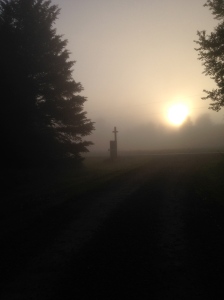 In spring, in summer

, through the fall and in the winter these evergreens stay, well, ever green. And while they don’t bear fruit or dazzle me with leaves of color, they are not dormant. So when, one spring day, I chose to look I was amazed by how many teeny, tiny pine cones were growing from top to bottom of the enormous trees.
So I showed the kids, who seemed to care only a little more than less. And time went on. Seasons changed, summer passed, the weather cooled and back down the driveway for bus duty I resumed my multiplicity of trips.

And I saw them again. 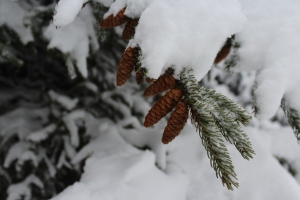 ow blanketed the landscape and I went to take pictures of the beauty and there I saw them.

“Pine cones, what’s the matter, why didn’t you fall when autumn came?”

‘Cause see, I didn’t know, that wasn’t their timetable. They weren’t born by a deciduous tree, they were on an evergreen; and as such, their timing takes longer, years in fact. So the pine cones grew on. If I judged the productivity of the pine cone against the growing season of the fruit of a leafy tree, I’d likely conclude they had missed their chance or something was wrong. While the purpose is similar, God’s design and timetable for a pine cone and an apple are not the same.

We can learn a lot about ourselves from the difference.

1 Corinthians 12 compares the members of the spiritual family to a physical body. Our ONE body is made up of MANY parts. Even though the parts are different they come together to form one body. Each part has a purpose.

The purpose for which our loving Father has specially made you may not look like anyone else but the beauty of an apple doesn’t make a pine cone ugly. Your value isn’t lessened because your purpose may be more subtle.

An apple ripens in one growing season while a pine cone may take years but that doesn’t make it slow or behind the curve. Your spiritual maturity isn’t lessened because your time has not yet come.

When a pine cone becomes squirrel food instead of a seed bearer, that doesn’t mean the pine cone failed but that its purpose was different. Our loving Father knows when and how best you were meant to be the utilized for His glory. 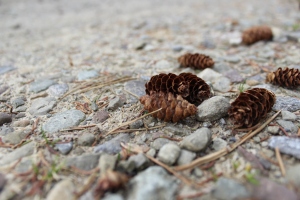 So when you feel like your time will never come or you are without purpose… remember the pine cone and trust that God knows what he’s doing.

2 thoughts on “Wednesdays with Jillene: of pine cones, timing, and purpose”

Other than this picture there is only one other picture I wish I could share with you of Keith Griffin. (And that would be of him jumping into the pool at the Holiday Inn when ABY exceeded the mission fundraising goal!) Keith was one of a kind!
Do you ever get a little emotional over the strangest of things? 150+ campers at camp playing games on the field but it was this sight that stopped me in my tracks. Piles of belongings, notebooks, and Bibles left by campers between Vesper service and evening games. And this sight shouted, “This is camp! Evidence of campers. Evidence of community. Evidence of God. All on display at the basketball court.” We need this… we need these simple moments of living life together… and… for all the hard work that it takes to make camp happen, all the lost sleep, all the sore feet, all the sacrifices… it is all worth it for these little, beautiful, powerful experiences that give us a glimpse into the heart of God and the joy of heaven awaiting us!
Calah turned 8 today! Our girl has grown so much this year. One of my favorite stories from this year happened one afternoon when her oldest brother and dad were changing tires on the car. They worked right through lunch and she noticed they didn’t come inside for the meal. Calah asked if she could make them food and she packed them a bag lunch and brought it out so they wouldn’t get too hungry while working.
It’s been a while since we’ve played a game of Guess the Narrawaggle. Tonight’s dinner conversation was “Choose your favorite Disciple.” Complete with card stock cut outs (from Calah’s bedroom wall decor), good discussion, research on each man’s ultimate fate, and resulted in choosing “favorites.” So… what do you think? See below for the list Narrawaggle names and a list of the disciples the kids chose. Your task, should you choose to play, is to see if you can match (or guess the matches) for which Narrawaggle selected which disciple. In typical Guess the Narraway form… there may be no logical way to guess the matches. 🤣
In case you were SUPER curious concerning the opening day of the Narrawaggle River Adventures 2022… today was that day. The water was cold, it didn’t last too long, but it was sooooo good to play again in the water and sand. #narrawaggles #goplayoutside #riveradventures #gauleyriver
Today Iris turned 6! In order to capture Iris’ personality in one picture we would need to show her jumping/tumbling around, writing words, collecting toys, playing with her siblings, and just in general being our cute lil’ punkin’! She’s both a sweet and tough girl in one! We love you, Iris Maia! Happy birthday! #iristurns6 #narrawagglebirthday